Case Study: The Challenges of Multiple Dogs of Varying Ages 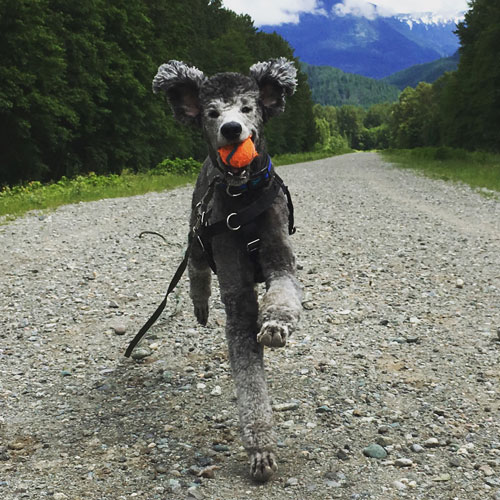 A recent yelp for help from a senior woman who lives alone with a new puppy, an adolescent poodle and a senior dog…

Max, the senior dog still needed attention and companionship. Being a large breed, it was important to keep up his mobility and physio exercises too.

Sky, like all puppies, was a busy boy! Having a yard and other dogs to play with (or pester?) helped ease some of the burden of care but he still needed to be socialized and trained!

The puppy was not the worry. Donna was up for that job. She’d raised many wonderful canine companions before.

The challenge was Layla. Teenage angst stage was manifesting in increased barking and now lunging at dogs and bikes.

Donna knew she needed professional help before the leash reactivity got worse! And to ensure that the new puppy was off to a good start too!

Then a plan for Layla. Layla was acquired as a puppy from a good breeder. She was a bit timid from the start. That compounded with the long, dreary winter during the early weeks of puppy hood at the critical early socialization stage made for a lack of positive experiences. Hard to catch up on socialization, but not impossible! Planned behaviour modification and training was needed. The challenge was that she also had a bit of a “fiery” temperament.

Layla was signed up for day training. Her trainer, Maren, took her on outings to learn that there were better options than reacting by barking and lunging when she was excited, frustrated or worried. Fun and games and manners all mixed together with just the right combination for each situation.

When better behaviour was off to a good start, Maren handed Layla’s leash over to her owner. Next, a few coaching sessions to transfer the new skills … and …

Donna had always lived in a multiple dog household and had always had “good” dogs. Now she does again! Wagging happily ever after 🙂

Thanks for stopping by. After 20 wonderful years of serving Squamish dogs and owners, we are relocating and no longer accepting new clients. Follow us to hear more about our next ventures. @pawinhandsquamish